As I tiptoed along the buttery sand, the restless water sloshing at my feet, I had no trouble spotting Dennis Massoud. There sits a man with skin the colour of coffee, a well-loved suede cowboy hat sliding off his crown. “I love the sand,” Dennis tells me. “When you’re building with the sand, you’re touching something that’s the foundation of our creation.”

Whether you believe in a creation story or not, most of us can accept that after you circle the drain, and your sightless eyes stare no longer, what is left of you quite literally transforms into dust. This is the fleeting nature of life. It is also the nature of Dennis Massoud’s artwork.

Dennis is a sand sculptor. His profession involves spending hours and hours on a sculpture, only to have it blown away in the wind, flattened to a lump of old grit.

“Sand sculpture involves creating an artwork out of sand, water and sometimes wooden braces,” said Dennis, his hands wrist-deep in the sand. I assure you, that while Dennis’ description sounds relatively simple, these sculptures are far from the pictures in your childhood photo album. 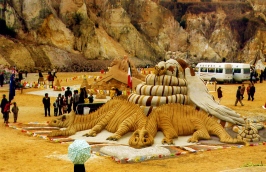 Dennis working on a sculpting a dolphin. Source: http://sandinyoureyes.com

Dennis working on a sculpture commissioned by Qantas. Source: http://sandinyoureyes.com

Dennis is a performance artist. His sculptures have taken him around the world nine times, including competing internationally in China, America, and the Middle East, while busking at festivals and special events all around Australia.

Dennis doesn’t talk about being a creator. He talks about being instructed. “I’ve been attracted to sand all my life,” he said. “The way that life affects the sand, the way that the colours change is incredible. Being a sand sculptor is almost like being an archaeologist. And you’re building something new through something that already existed in another conscious state.”

Perhaps Dennis’ sculptures existed previously. His family pioneered tourism in Noosa, South East Queensland. The Massouds led a tour called the ‘Coloured Sand Tour’. Eight-year-old Dennis would drive a 1942 Bren Gun Carrier, a tank, along the beach to show tourists the vivid sand colours. How did he reach the pedals, I asked? “My uncle wired big rocks to the pedals so I could reach them properly.”

Sand sculptors, according to Dennis, aren’t alone in their belief of instruction. Tibetan Monks spend days and sometimes weeks on sand mandalas that reveal the harmonious philosophy of life. Their transient artwork is constructed to remind one of the beauty of impermanence, and well as the healing power of artistic creation.

In the material world we live it, we are forever yearning for things. More space on our iPhones, the latest Nike Free Run’s, a Camilla jumpsuit. In the 21st century, a desire for transient existence is rare. As I watched Dennis move around his sculpture, his knees dented from years of sand-burn, he reveals an admiration of creation, and an acceptance of destruction.

Much like Dennis, Tibetan Monks create intricate sand mandalas before pouring it all in a bag and scattering it as a blessing. They believe that the secret of happiness is not to turn away from beauty and creation, but to avoid the associated attachment. This attachment to objects and things distracts us from collecting experiences. Dennis agrees. “We think that we’re permanent, but we’re not. Life moves on. When we connect with sand, we connect with that eternal process that goes back to early days. Sand is reflective of the eternal journey.” Perhaps the answer is to simply make more sand castles.